Looking for a future-proof Mobile CMS? Sanity is a mobile-ready headless CMS that fuels omnichannel experiences. 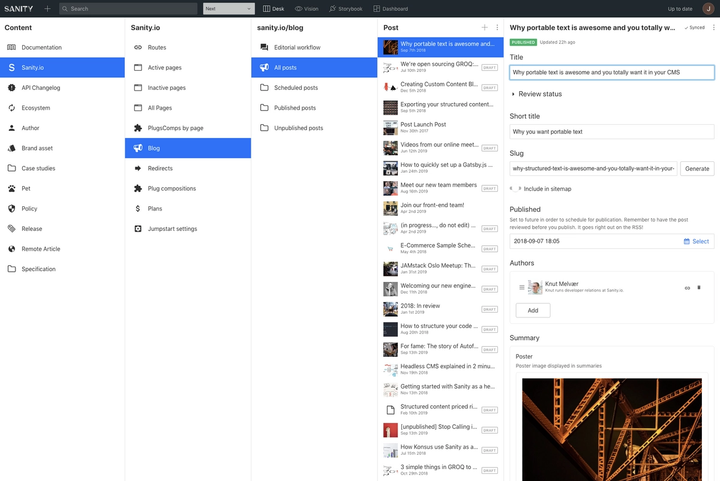 Continually amazed by the power and flexibility of Sanity. I've used most of its competitors, and it's far-and-away the best product

Leverage the React-based Sanity Studio to manage content from any device with a web browser. The Sanity Studio is a responsive SPA that makes collaboration across teams simple and improves the productivity of content authors, marketers, and other users. Accelerate the content velocity for your content-driven apps with Sanity Studio’s efficient workflows, powerful editing tools, and intuitive UI.

Use Sanity Studio to publish content to tablets, mobile phones, and more from a centralized location. Sanity stores data as structured content in a rich-text format that’s flexible for publishing across a wide range of digital channels without additional effort by content authors. Reduce the workload of content authors with channel-agnostic content and easy publishing using Sanity Studio.

Integrate With Any Framework

Give your developers the freedom to integrate Sanity with nearly any frontend framework to build PWAs or native apps. Developers can quickly create mobile responsive PWAs with React, Angular, and Vue with easy integration via APIs, GraphQL, or Sanity’s Graph Oriented Query Language (GROQ). For native mobile apps, developers can use the Android and iOS developer tools or a cross-platform framework like React Native or Ionic as well. There’s no limitation on how Sanity can be used to fuel digital experiences.

Generous quota included. Pay-as-you-go for users, usage and features on all plans.

Get Started For Free